Comments: This Chikorita kid really embodies what I think of when I think about Chikorita. It's super cute, chubby, and has the classic Chikorita look!

Little Cyndaquil Figure
I know nothing about this little figure! It appears that it may be part of some toy set because it doesn't have a date or company stamp on it anywhere. But it's really small and adorable and I love it. If you have any information about this figure, please let me know! 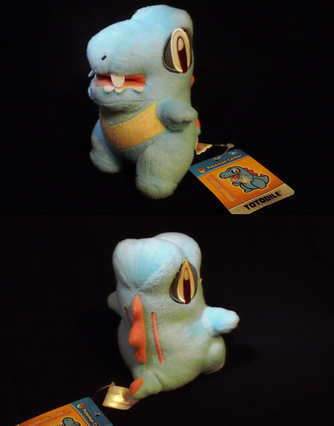 
Comments: When the Johto starter pokedolls first came out, I thought Totodile and Chikorita were cute, but Cyndaquil was my top priority and I decided that I didn't really need to try to get the other two. When HeartGold and SoulSilver came out, I decided I might like to buy them if they ever became easily available. Totodile was at Mitsukoshi once when I went to EPCOT, so I grabbed it!


Comments: This figure is super adorable! I really love Furret, and I am glad this figure accentuates its cute little paws!

Flaaffy Zukan Piece
Year: ? (Please let me know if you know the year of the original Mareep line Zukan release!)
Company: T-Arts
Country of origin: Japan
Where I bought it: Convention


Comments: This figure is super tiny and super adorable!

Comments: Like many of the Johto-era kid figures, I think this one really embodies what I think of when I see Espeon's name!
Powered by